20.04.2011
Workshop for dancers, performers, choreographers and all that are interested in movement research.

Work on stage presence, stationary performative exposure and "un-educated" body had been some of major issues in Ferlin's choreographic work. He is offering ways of un-educating the body and creating physical distance from dancing itself, having experience that his body has been systematically »over-educated" throughout time. These ideas keep encouraging him to treat dance as "the last resort" or "the last choice" in making performance art. Constantly busy with setting up new ideas about conceptual virtuosity and rejecting the virtuosity of movement. In his last performance Nastup/Onformance he defines the system of movement as a manifest series of decisions / rules which direct the idea of dance exclusively towards pure movement, devoid of all possible gestures and meanings inscribed in it. His workshop will focus on the exploration of the system that is based on both the aforementioned premises and also on the idea that the body as such is devoid of all concepts of prior dance knowledge and that morphology of a body without (prior) knowledge is possible to be translated into a developed body of an active dancer. The workshop will offer different methods and ways on "how to un-educate the body" and therefore it is meant for participants with certain level of dance education, dance technique.

Matija Ferlin is a dancer and a choreographer. He graduated at the SNDO in Amsterdam, the Netherlands. He worked with a number of choreographers and directors, including Ivica Buljan, Maja Delak, Ame Henderson, Sasha Waltz, Keren Levi, Martin Butler, David Zambrano, Mauricio Ferlin, etc. Ferlin has presented his own stage performances, short films and exhibitions across Europe and North America. Since 2007, Ferlin lives and works in Pula, Croatia. For his performance NASTUP (Onformance) he received the highest Croatian Theatre Award for the best choreographic realization in 2010. According to the V Magazine (New York) he is one of the most promising young choreographers in 2010. Matija is currently working and living in Pula, Croatia. 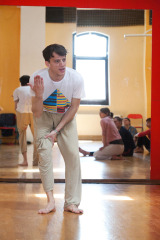